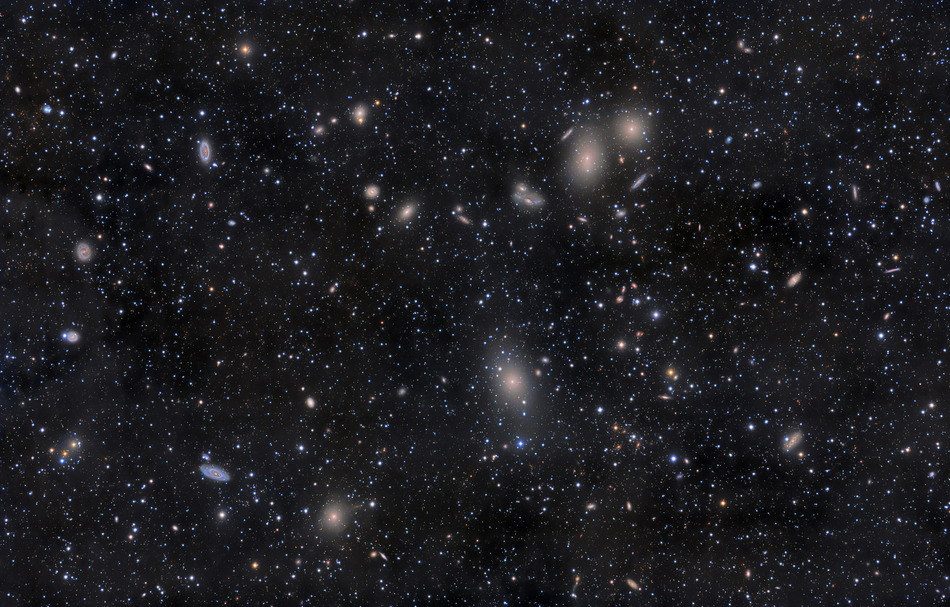 This is the centre of the Virgo Cluster of galaxies. It lies at the heart of the bigger Virgo Supercluster. Our Milky Way, together with the Local Group, is an outlying member of the Virgo Supercluster, so you can consider this to be the centre of the "cosmic city" we live in. The Virgo Cluster is 54 million light years distant from us, which on a galactic scale is very close. If we go still further away we reach the Coma Cluster. The cluster is a mix of elliptical and spiral galaxies containing about 2000 galaxies. In this image you can see only a fraction of them; many of the objects in this image are stars in our own Milky Way.

The biggest two galaxies, M86 (top right of the centre) and M87 (a bit below the centre), are huge elliptical galaxies. M87 is a beast; it has a diameter of 1 million light years, which is 10 times that of our Milky Way and it's 200 times more massive, about 50 trillion solar masses. The Virgo Cluster is not really a big one. It contains 250 large galaxies and approximately 2000 smaller ones. By "large" we mean galaxies which are about half as big as the size of the Milky Way or bigger. Our Local group with about 50 galaxies, for example, has three large galaxies: the Andromeda Galaxy (M31), the Milky Way and the Triangulum Galaxy (M33).

The interstellar medium between the galaxies (also called the intercluster medium) contains eight times more gas than the mass of all the galaxies in the cluster combined. This gas has a high temperature of about 1 million Kelvin. Also part of the intergalactic medium are stars that exist far outside of any galaxy, they may even account for about 10% of the total mass. We say "may" because these lonely stars are very hard to detect at great distances, so the exact percentage is not yet known.