A black hole is an extremely massive object of relatively small dimensions. A black hole deforms space-time so strongly that it creates a real hole in space itself where nothing that has once fallen into it will ever be able to escape again. The largest known black hole lives in the centre of a galaxy called Holmberg 15A. It has a whopping mass of approximately 40 billion solar masses. In May 2020 astronomers discovered a black hole that is only 1000 light years away. It is in the Telescopium constellation and is the closest black hole to Earth. With a mass of 4 Suns it is, however, a relatively small black hole. 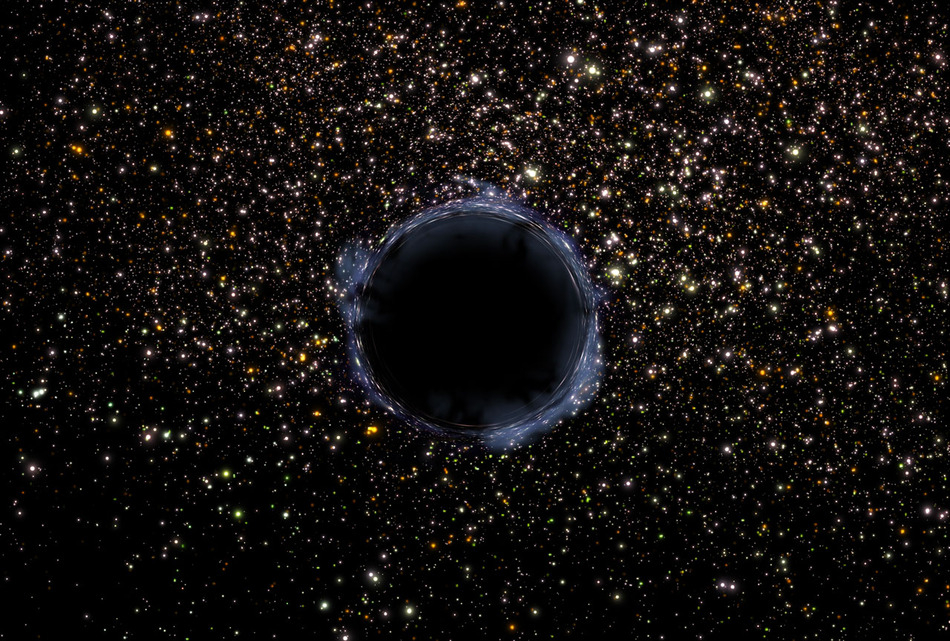 An artist's impression of a black hole, Credit: NASA/ESA and G. Bacon (STScI)

A black hole deforms the fabric of space around it so strongly that it creates a hole in space itself. This way nothing is able to escape from a black hole, not even light - that's why we will never be able to measure anything inside a black hole. For astronomers the only three measurable physical properties that completely specify the characteristics of a black hole are its mass, its charge and its angular momentum.

And what's inside the event horizon? Nobody really knows. Einstein's general relativity describes a singularity; all the matter and energy are pushed into an infinitely small space. Or there might be a quark star: similar to a neutron star it could be composed of quarks. You can read our supernova or neutron star articles to better understand the concept. 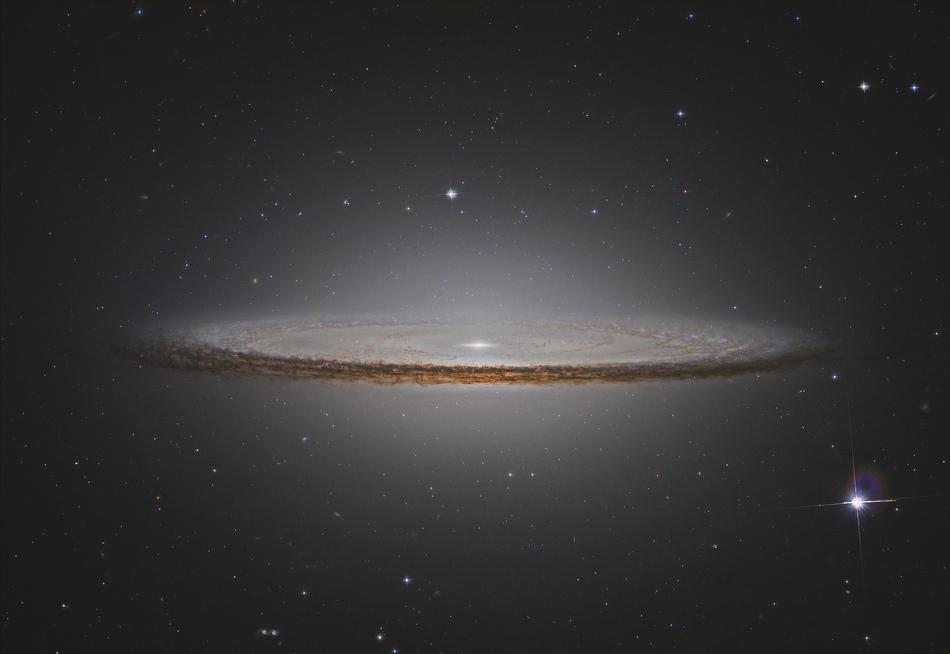 There is a supermassive black hole at the centre of the Sombrero Galaxy. Credit: Vicent Peris (OAUV/PTeam), MAST, STScI, AURA, NASA 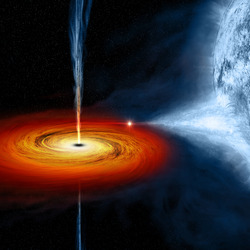 An artist's impression of the black hole Cygnus X-1
Matter - mostly in the form of gas and dust clouds - that is in the vicinity of a black hole will enter an orbit around the black hole. Since the black hole is relatively small compared to the size of the infalling clouds, almost no matter falls directly into the black hole. In the proximate vicinity of the event horizon the matter forms an accretion disc which is strongly heated up by friction. The friction transports part of the angular momentum outwards, shrinking the radius of the orbiting matter to a closer radius around the black hole until a point where it finally falls into it. The potential energy released during the shrinking of the orbital radius heats up the infalling gas which can reach temperatures of tens of millions to even more than a hundred million kelvin. We will never be able to directly see a black hole, but we can detect these hot accretion disks. An accretion disk emits very strong radiation in the form of electromagnetic waves, from radio waves to X-rays (see the electromagnetic spectrum for more details). X-ray emission is the strongest of all emitted wavelengths, so we can detect black holes by observing the sky through X-rays. The processes in the accretion disk convert around 10% of the mass of the infalling matter into energy (according to E = mc2), quite a lot compared to the 0.5% to 0.7% that are emitted in the case of nuclear fusion, the process that releases almost all energy radiated by stars. 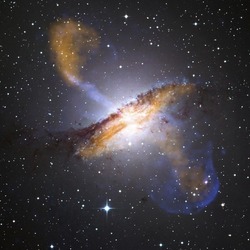 Centaurus A with its two relativistic jets
If a lot of mass is falling towards a supermassive black hole in the centre of a galaxy; these galaxies become so-called active galaxies. A brilliant example of an active galaxy is Centaurus A. Centaurus A emits two relativistic jets with emissions in X-Ray and radio wavelengths, each about 30000 light years long. Within the inner parts of these jets the matter moves at speeds of about half the speed of light. Further out the matter collides with the gas that surrounds the galaxy, creating high energy particles. What can be the reason for such an outburst of energy in the vicinity of the supermassive black hole? Most probably it's the collision of Centaurus A with a smaller spiral galaxy.

Make sure you take a look at our Q&A section about black holes!

A gas cloud near the Milky Way's cent...