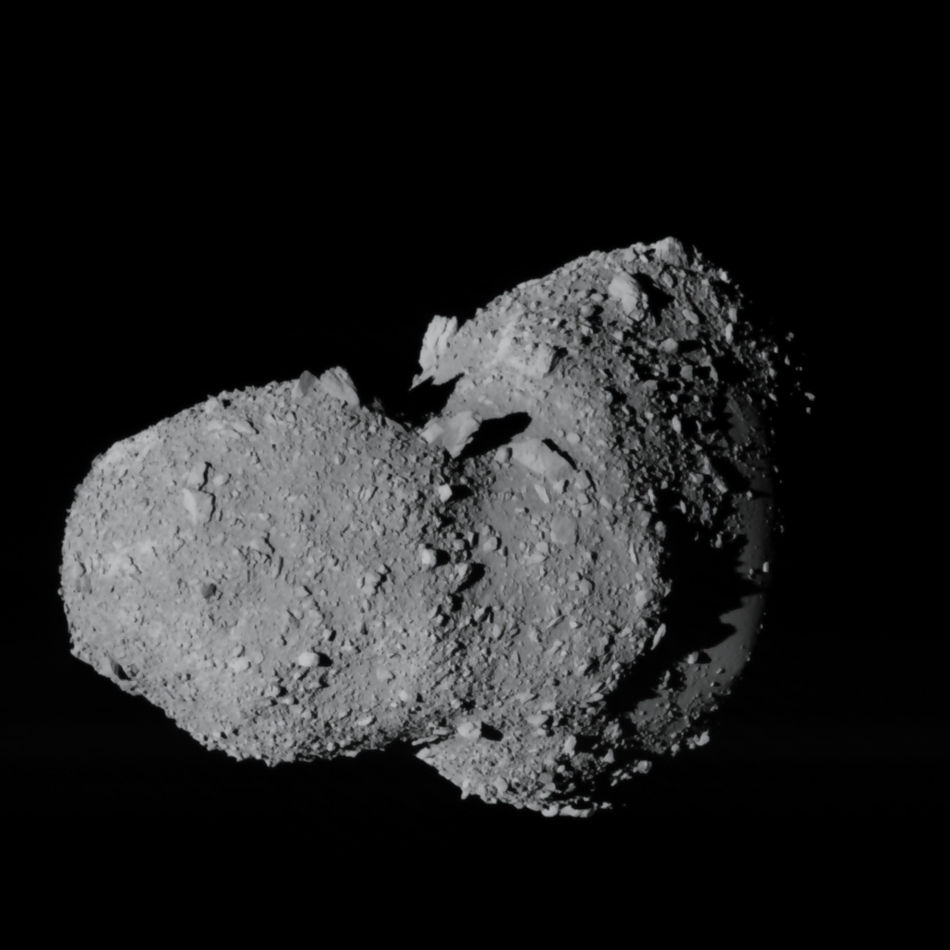 Asteroid Itokawa, an Apollo asteroid with a length of 500 metres. Credit: JAXA
Some asteroids have very elliptical trajectories, crossing the orbits of the inner planets Mars, Earth or Venus. The cause of these elliptical trajectories could be collisions within the asteroid belt or the gravitational influence of the massive planet Jupiter changing the orbits of some asteroids gradually over time (see orbital resonance). All asteroids with orbits so eccentric that they cross Earth's orbit are called 'Apollo asteroids', 'Amors' approach the Earth but do not cross Earth's orbit. Apollo asteroids are doomed to sooner or later collide with one of the inner planets, usually within a few million years of their orbit becoming so eccentric. The largest Apollo asteroid - 1866 Sisyphus - has a diameter of about 9 km, similar to the asteroid that caused the Chicxulub event, the giant meteorite impact that caused the extinction of the dinosaurs. Anyhow, Sisyphus and none of the other big Apollo asteroids will collide with Earth in the next millennia; which doesn't mean that smaller bodies can cause local damage. Many of you will remember the Chelyabinsk event which took place on the 15th of February 2013. Fortunately no people were killed during this event and today you can even buy a Chelyabinsk meteorite.

Generally speaking, meteoroids are all the smaller objects in orbit around the Sun. Most of them originate from comets that lose gas and dust when they approach the Sun. Other meteoroids are basically small asteroids. There is no exact diameter that distinguishes an asteroid from a meteoroid. Wikipedia states 10 metres; other trustworthy sites call anything smaller than 1 km a meteoroid. Anyhow, the vast majority of all meteoroids are just a few millimetres and less in size. The smallest and by far the most numerous ones have sizes of small dust particles and are called micrometeoroids; they do not leave any visible trace behind when they enter the Earth's atmosphere. 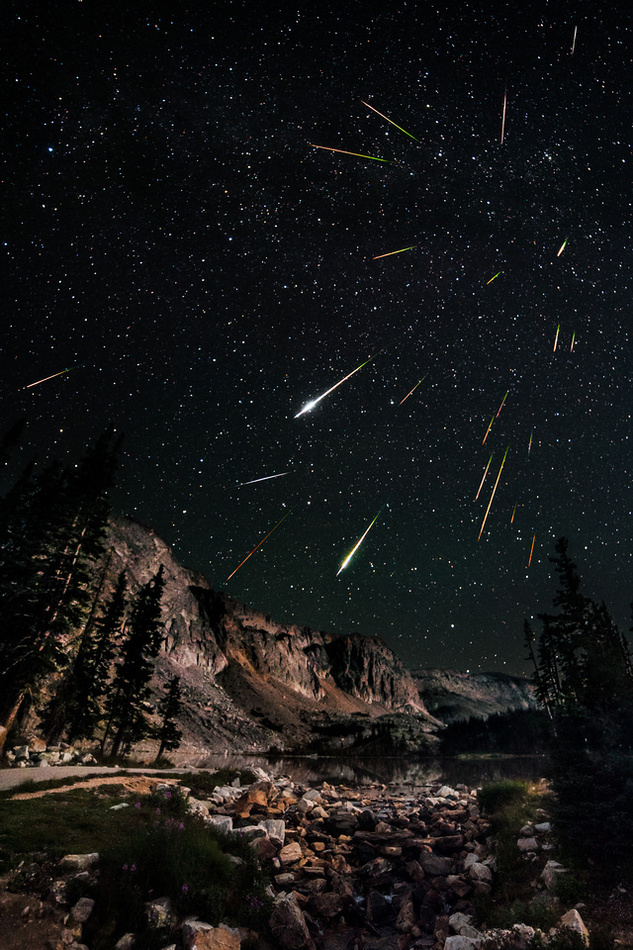 The ones about the size of a pebble leave behind a flash of light when they completely vaporise. Most people call this flash a "shooting star" or a "falling star", but more accurately spoken this is a meteor. A meteor is the light that you can see when a small meteoroid enters the Earth’s atmosphere. This normally happens with speeds between 11 and 73 km/s and at altitudes of about 75-120 km. Under a clear sky an observer can see 5 to 10 meteors per hour, especially after midnight when the Earth has rotated so far that the observer's part of the sky is positioned in the direction of the Earth's motion around the Sun. During so called meteor showers the rate of observable meteors per hour can increase significantly. Meteor showers are caused when the Earth crosses higher than usual concentrations of particles that are themselves in an eccentric orbit around the Sun. Since the orbit of these particles is fixed, we encounter this stream every year at the same time - just its density cannot be foreseen. This sometimes leads to sparse meteor showers and sometimes very intense meteor showers with more than 1000 meteors per hour, also called meteor outbursts or meteor storms. The meteors we see can be debris from a comet (> 90% of all meteors we see) or an asteroid. The most famous meteor showers are the Perseids in mid-August (caused by Comet 109P/Swift-Tuttle) and the Leonids (mid-November). The meteors during these meteor showers almost all emerge from the same section of the sky; indeed the meteor showers are named for the constellations from which the meteors appear to originate. 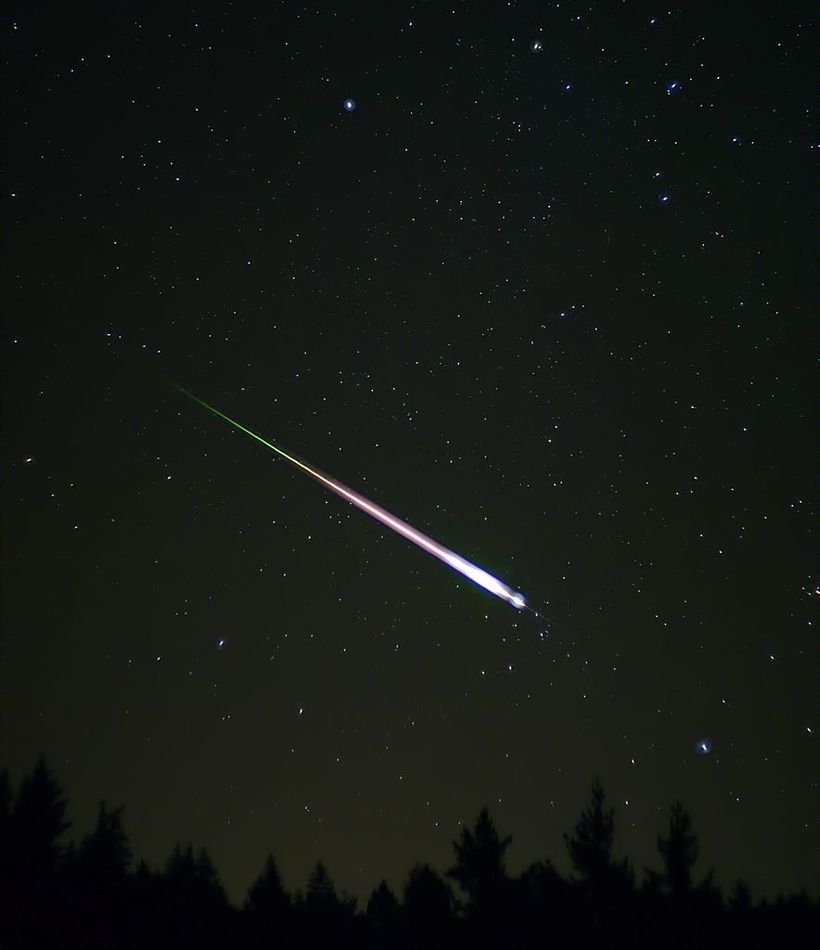 Leonid meteor, image taken during the peak of the 2009 Leonid Meteor Shower (17th November). Credit: Wikipedia.org, user: Navicore.
But what causes the light path of the meteor that we can see in the sky? Smaller meteoroids will be heated by adiabatic compression until the point when they completely disintegrate. However, the light emission we observe is mainly caused by interactions between evaporated and detached components of the fast moving meteoroid and air molecules. Both the meteoroid atoms and the air molecules ionize during this encounter. When the free electrons recombine with the ionized atoms in the tail of the meteoroid they emit the light that we can observe. The light track can have a length of up to several tens of kilometres and an initial diameter of a few metres. The colour of the meteor is an indicator of the material of the meteoroid; e.g., a yellow colour is caused by iron, a blue-green colour by copper and a red colour by silicate material.

A meteor that is larger and brighter than normal is called a fireball; brighter than the brightest planet in our night sky (Venus). If these fireballs also break apart or explode during their atmospheric flight - sometimes accompanied by considerable audible sounds - they are called a bolide.

Finally, every asteroid or meteoroid that survives its passage through Earth's atmosphere (and this is the rare exception) can be advanced to be called a meteorite. Meteorites are made of rock (stony meteorites), metal (iron meteorites) or a mixture of these two materials (stony-iron meteorites or pallasites). Pallasites form beautiful olivine crystals that are embedded into a metal matrix. Scientists are eager to study meteorites since they are the very first material that was formed in our early solar system, almost 4.6 billion years ago. Sun.org offers genuine meteorites for sale in our meteorite shop. 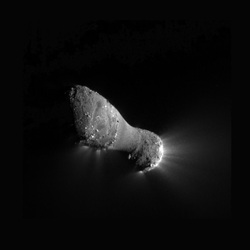 Comet Hartley 2 has a length of about 2 km and a short orbital period of just 6.46 years. CreditNASA/JPL-Caltech/UMD.
Comets are asteroid-like objects which are composed of ice, dust and rocky particles; that's why they are also called 'dirty snowballs'. The sizes of their nuclei vary between a few hundred metres to tens of kilometres in diameter; their visible tails can extend to above 150 million km in length. They originate from outside Neptune's orbit and - like many asteroids and meteoroids - are unmodified remnants of the formation of our solar system about 4.568 billion years ago. When comets approach the Sun the solar radiation and solar winds cause particles to sublimate and detach from the comet, forming a tail of particles which often makes them visible in the night sky even to the naked eye. We say 'sublimate' (a direct phase transition from the solid to the gas phase) since with zero pressure in space, water will not exist in the liquid phase. Anyhow, below its surface there can also be reservoirs of liquid water which can vaporise and feed jets of water vapour.

Comets orbit as around the Sun on elliptical orbits until all of their volatile material has evaporated away. The orbital periods vary between a few years (like comet Encke) and tens of millions of years. While we can observe Halley's Comet every 75 years we need to wait 106 000 more years until we see Comet Panstarrs (C/2011 L4), our guest in 2013, the next time. 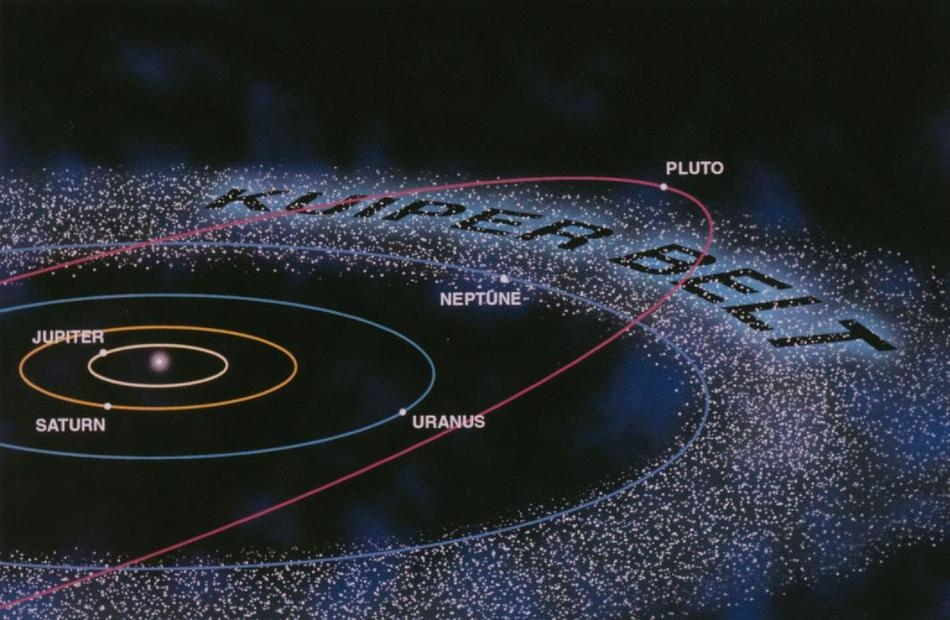 The Kuiper belt is the region from where most of the short-period comets derive. Credit:NASA.

Short-period comets mainly originate from the Kuiper belt, a region in the solar system with many millions of icy bodies extending from about 30 AU (about the orbit of Neptune) to 50 AU. If some of these icy bodies get too close to Neptune during their orbit they may be deflected and enter a new, eccentric orbit which will make them become short-period comets. Long-period comets normally originate from the Oort cloud, a region between 2000 AU and 50000 AU (or about one light year) away from the Sun. The Oort cloud consists of trillions of icy objects with diameters above 1 km. With these huge numbers we can be sure that there will be no shortage of comets visiting the inner part of the solar system in the future. But what causes these icy objects in the Oort cloud to leave their stable orbit and approach the inner part of the solar system? Without any "push" they would certainly continue orbiting in the Oort cloud forever. But gravitational perturbations of nearby passing stars and the galactic tide can cause these comets to change their trajectory around the Sun and approach the inner parts of the solar system. The star Gliese 710 will approach within a distance of just 1 light year from the Sun in about 1.4 million years, scratching the Oort cloud and causing many objects to change their trajectories around the Sun. 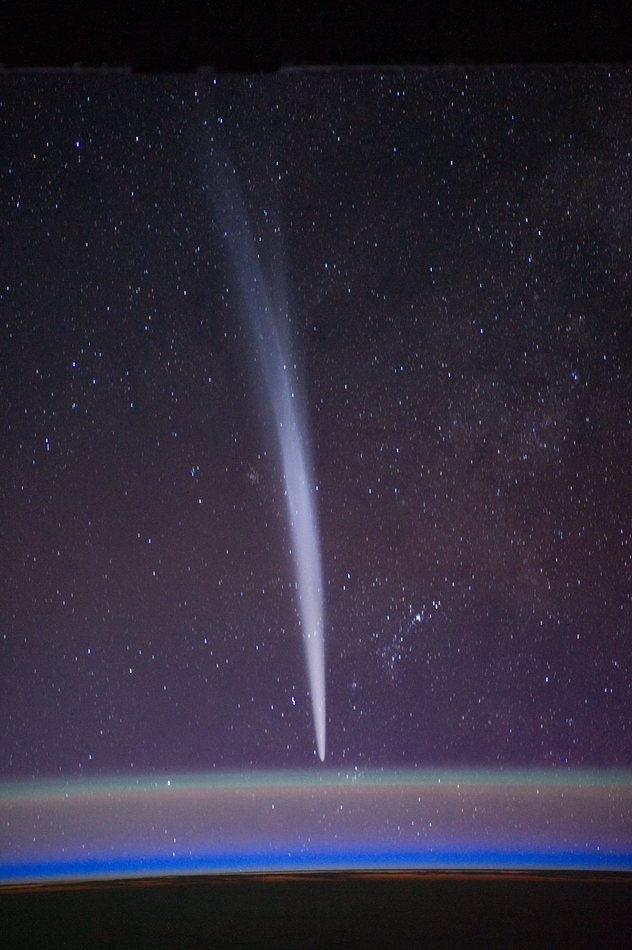 Comet Lovejoy. This image is taken from the International Space Station (ISS) on December 22, 2011. At the bottom of the image you can see Earth's atmosphere. Credit: Dan Burbank (ISS Expedition 30, NASA)
Comets from the Kuiper belt tend to orbit the Sun within the plane of the solar system because the Kuiper belt itself is aligned with the plane of the solar system. Comets from the Oort cloud can arrive from all different directions since the Oort cloud has a spherical shape. A comet's tail is caused by gas and dust particles that are sublimated and/or vaporised by sunlight and then blown away by the solar wind. The tail always streams out in the direction opposite to the Sun, but it doesn’t arise until the comet enters the inner parts of the solar system (somewhere between Mars and Jupiter), so that the sunlight can sufficiently heat up the comet. 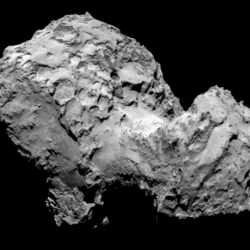 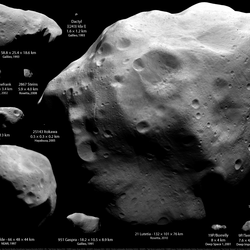 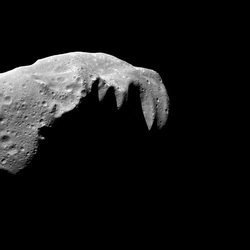