The interstellar medium (or ISM) is all the material which fills the space between the stars. The "empty space" between the stars is not a perfect vacuum. The density is very low, just between 0.001 and 100 000 molecules per cm3, compared to the 1019 (or 10 000 000 000 000 000 000) molecules in 1 cm3 of air at sea level. But considering the huge size of our galaxy, about 10% of the stellar mass in the Milky Way (or about 40 billionen solar masses) is in the form of gas and dust. The ISM consists of 99% gas (mainly hydrogen and helium) and 1% dust. The smallest fraction - just 1% - of the ISM is currently part of molecular clouds, the regions in space where new star systems are born. So there is plenty of stuff left to ensure many more billions of years of star formation in the Milky Way.

The interstellar medium begins about 100 astronomical units (AU) away from our Sun. Everything inside this hypothetical sphere is called interplanetary medium. The space probe Voyager 1 - the furthest human-created object from Earth - reached the ISM in 2012. By the way, Voyager 1 has not yet left the solar system as many newspapers and magazines have often reported. The gravitational influence of the solar system itself reaches far out into the Oort cloud which extends as far as 100 000 AU away from the Sun, 10000 times further than Voyager 1 has travelled so far. 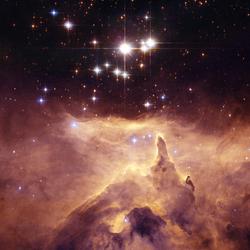