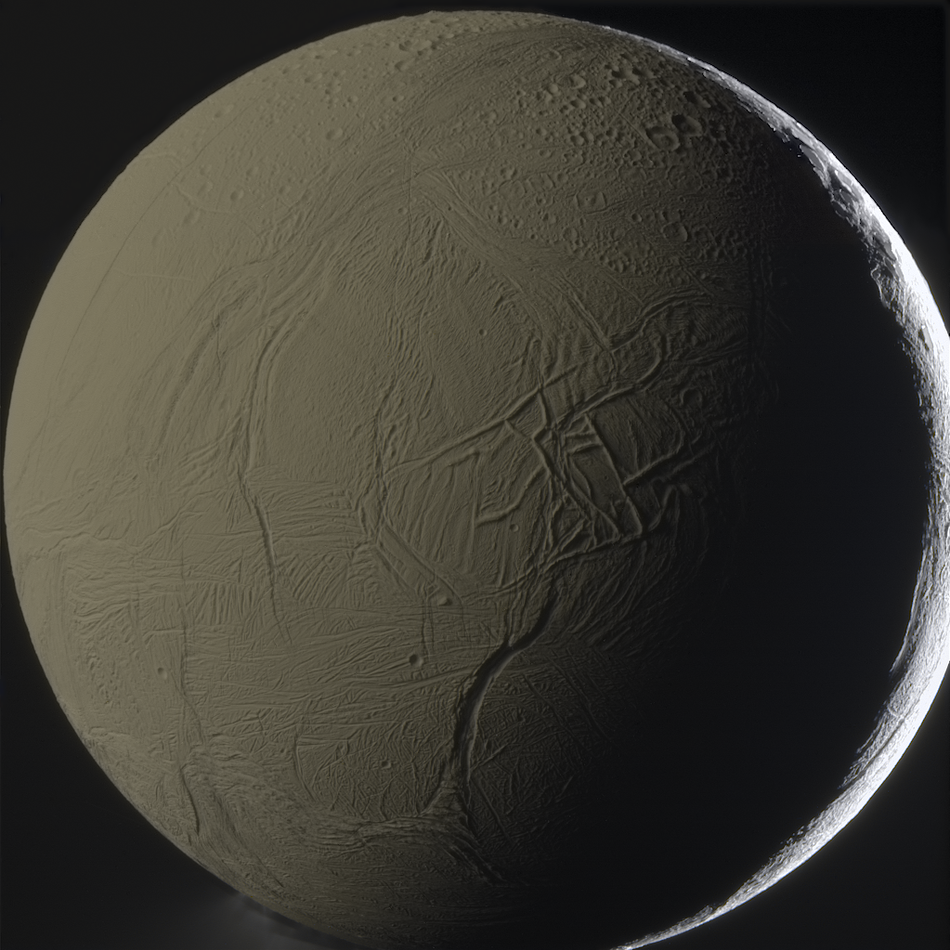 Enceladus, one of Saturn's moons, is actually quite small; just 500 km in diameter. But it is one of the most interesting moons in our Solar System, since below its thin and icy surface there seems to be liquid water. The surface of this moon is normally snow-white. Since it has been photographed by the spacecraft Cassini from the opposite direction to the Sun, it's thanks to the reflecting light of Saturn that we can see Encedalus in a slightly golden colour.

Cryovolcanoes (ice volcanoes) at the South Pole erupt and huge plumes (or jets) shoot ice particles far into space. You can see these plumes rising above the South Pole of Enceladus on the image below. Some of these ice particles fall back as snow onto Enceladus, others add particles to the rings of Saturn and some fall onto Saturn itself. The Cassini spacecraft had the opportunity to fly through some of the plumes. The remarkable discovery was that apart from ice these jets also contain methane and even complex organic compounds. Unfortunately the spacecraft was not designed to analyse these compounds since scientists didn't expect these kinds of hydrocarbons inside the plumes. But with an ocean full of liquid water and organic compounds below the surface, Encedalus is considered to be one of the most interesting places in our Solar System to search for life.

Temperatures below Enceladus' surface are high enough to sustain liquid water due to radioactive decay (the same principle as on Earth) and tidal heating. Tidal heating occurs when a moon orbits a massive planet and the planet’s tidal forces cause friction (heat) in the moon. Other moons with liquid water beneath the surface are Jupiter's Ganymede and Saturn's Europa. Also one of Neptune's moons, Triton, is thought to have a crust of water ice and once may have hosted an ocean. Titan is another very interesting moon in our solar system, the only moon with a dense atmosphere, denser than that on Earth. Titan has liquid rivers and lakes of methane on its surface and a weather system with evaporation and methane rain showers, similar to the weather cycles on Earth. Beneath its solid surface Titan may also have a liquid ocean that may harbour life.