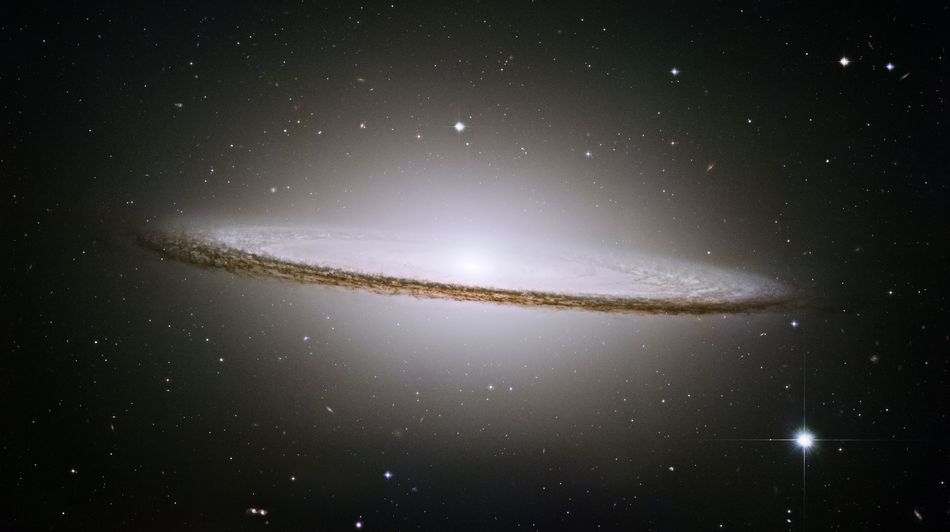 29 million light years away from Earth, 4 times more massive than the Milky Way and with a supermassive black hole of at least 1 billion times the mass of the Sun; that's the Sombrero Galaxy. It's a spiral galaxy with a very prominent outer dust lane. The Sombrero Galaxy doesn't look like a normal spiral galaxy since we look at it nearly edge on; it's tilted just 7° to our line-of-sight. The second reason for it looking a bit different is the extended centre (bulge) of the galaxy, with billions of stars causing the diffuse glow in the image. This halo exceeds the edges of the galaxy by about 10000 light years and contains about 2000 globular clusters, 20 times more than our own galaxy has. The galaxy has characteristics of a spiral and an elliptical galaxy at the same time. If you open the full-size image you can see many more details of the galaxy’s structure, such as its star forming regions and also a whole lot of background galaxies. The Sombrero Galaxy can be directly observed even with a smaller telescope, provided that you have a clear sky without too much light pollution.

If you want to see even more details of this galaxy you can have a look at an image of the Sombrero Galaxy that has been reprocessed in a way that reveals just the spiral structure of this galaxy.