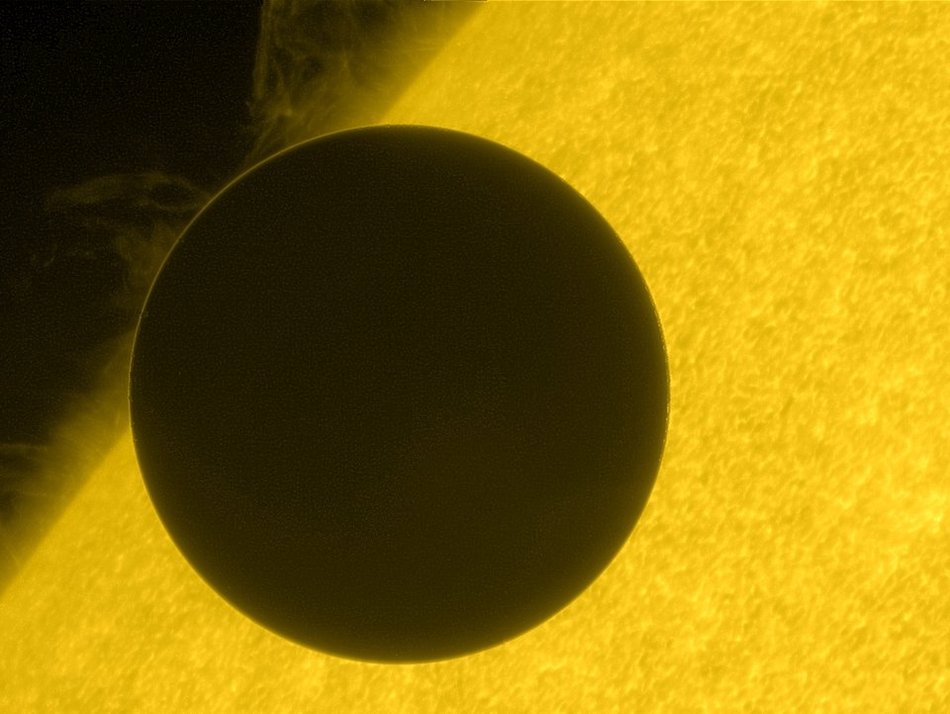 This is a beautiful image of the Venus transit on the 5th of June 2012. You can even see Venus' atmosphere since sunlight has been scattered and refracted. You can also see details of the Sun's surface and smaller protuberances, which are caused by hot gases rising and falling back into the Sun.

By the way: with help of such planetary transits we are able to analyse the atmospheres of extrasolar planets (planets in other star systems) and may even examine the first evidence of life on other planets. The light that passes through the atmospheres has a unique spectrum with which we can detect the components of the atmosphere itself. Some chemical compounds (like large amounts of oxygen) are biomarkers in the atmospheres of other planets, showing that we are not the only living species in our galaxy. In our Milky Way alone there are more than 10 billion planets in the habitable zone (the zone around stars where temperatures are moderate so that water occurs in its liquid form). Unfortunately only a minor fraction of all planets are aligned between the Earth and their home star in such a way that we can observe a transit, but maybe we will be lucky enough to find some candidates of planets with life.

There are two promising telescopes especially adapted for this kind of work: the James Webb Space Telescope and Cheops. Some future ground-based telescopes like the European Extremely Large Telescope (E-ELT) are also suited for this task. Even the famous Hubble Space Telescope, which is not at all designed for this kind of work, has already analysed the atmosphere of planet HD 209458b (a Hot Jupiter) finding sodium, oxygen (in small amounts) and carbon in its atmosphere. Being a Hot Jupiter this planet is certainly not a good candidate for supporting any kind of life, but this analysis is a first step towards examining other extrasolar planets’ atmospheres.