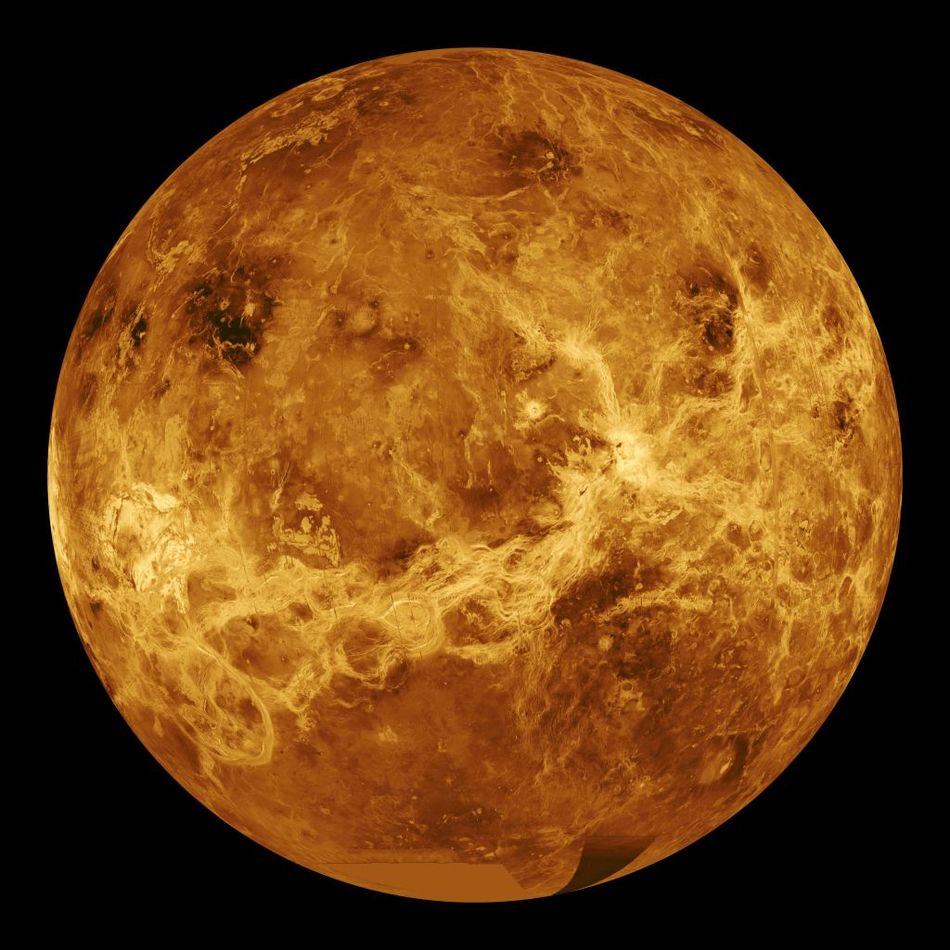 Since Venus' atmosphere is dense you cannot see any details of the surface with optical instruments. But NASA has used radar to map the surface of Venus and combined it with the true colours of Venus taken by The Soviet Mars probes Venera 13 and 14. This computer-generated image shows surface structures as the bright area in the middle of the planet, which is Aphrodite Terra, the largest highlands on Venus.

The surface of Venus has many geological features that resemble those on Earth: mountains, plains, canyons and volcanoes with solidified lava flows. Due to the enormous greenhouse effect and the dense atmosphere, Venus' surface temperature variations are just a few degrees. So it is about 462 °C on the whole planet, no matter whether you are standing on the equator or the north pole, or whether it's high noon or the middle of the night. Temperatures only drop with increasing altitude above Venus' surface.

But there is something strange going on with Venus: most of its surface is quite young, between 300 and 600 million years. You would expect a much older surface since Venus shows almost no signs of plate tectonics, a mechanism that continually creates a new planetary crust and recycles older one by subduction. This process renews the surface over a course of a few hundred million years. So what can the reason be for the relatively young surface of Venus if plate tectonics is not a possibility? Due to the absence of plate tectonics on Venus, its surface seems to be a single crusted plate. The heat inside the planet cannot escape into space as easily as would be the case with plate tectonics. The consequence of this reduced heat flux is that a tremendous amount of heat has accumulated below Venus' crust over the course of some hundred million years. Scientists believe that the mantle temperature increases until it reaches a critical value that weakens the crust so much that it cannot sustain its own weight anymore. Subsequently - over a period of 100 million years - huge areas sink down, accompanied by a heavy volcanism that fill the area of the submerging plates with fresh lava. These catastrophic events may occur regularly at intervals of 500 to 700 million years, each time creating a completely new crust. Quite a scary scenario!