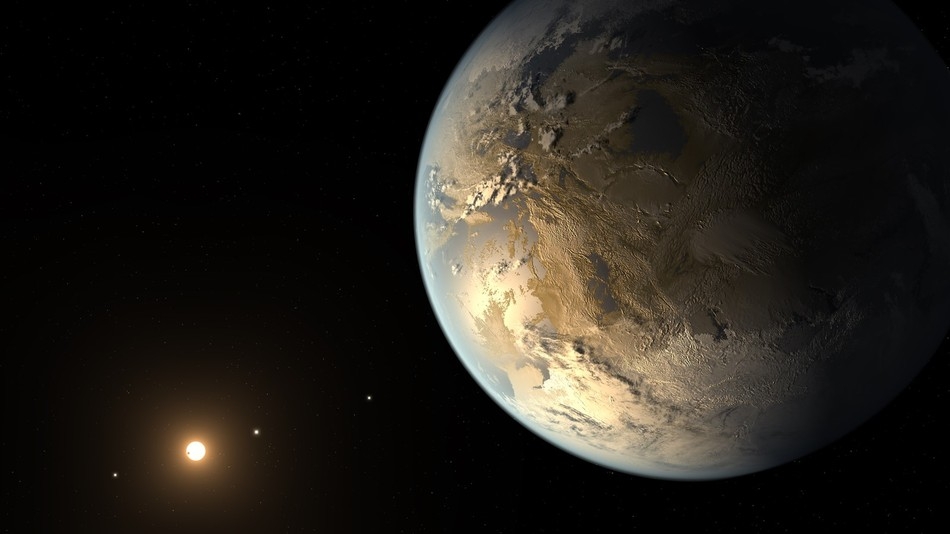 On April 17, 2014 NASA announced the discovery of an Earth-sized planet that orbits its host star (a red dwarf) in the habitable zone. It's the fifth planet in its planetary system; the four inner planets are illustrated in this image too. Kepler-186f is likely to be a rocky planet and this artist's impression represents just one of the possible surface conditions the planet could have: a rocky terrestrial planet with land masses and oceans. It might also be completely covered by oceans, thus it may be an ocean planet with a thick atmosphere. Unfortunately Kepler-186f is 500 light years away, too far to analyse its atmosphere with current or next-generation telescopes or even think about taking direct images that can reveal any surface detail. So, in the near future we will not know whether Kepler-186f is "just" an Earth-sized planet in the habitable zone of another star or if it is similar to our own planet with land masses, oceans, forests and animals or even intelligent life. Be cautious when you read headlines such as "Second Earth discovered" that pop up a few times a year in different media: it's much too early to proclaim such a hypothesis!

By the way: Earth-sized planets in the habitable zone are no rarity in our galaxy. Scientists have estimated that - just in the Milky Way galaxy alone - there could be 40 billion Earth-sized planets in the habitable zones of sun-like stars and red dwarfs. So Kepler-186f and our Earth are just 2 of the many billions of these potentially habitable planets in our home galaxy. And these numbers do not even consider the other hundreds of billions of galaxies that are out there in the observable universe...