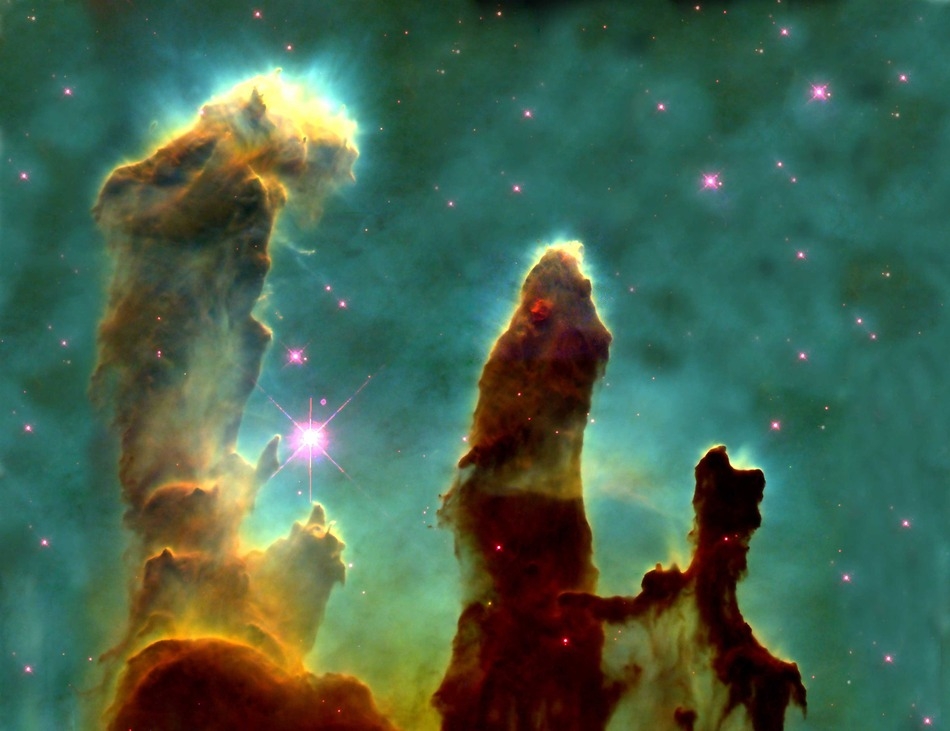 The Pillars of Creation are an active star-forming region, similar to the birthplace of our own Solar System, 4.6 billion years ago. The largest pillar has a height of about 40 trillion km (or 4 light years). The Pillars consist mostly of molecular hydrogen, helium and "dust" (a mixture of carbon, oxygen, nitrogen, iron and many other elements); all the ingredients needed to form stars and planetary systems around them.

The sad news is that these Pillars will be destroyed in the near future; either within the next 100 000 years by gradual erosion caused by the strong stellar winds of the new-born stars in and around the Pillars, or by nearby supernovas that blow away all remaining gas and dust. A group of scientists has discovered a cloud of hot gas that might be a shock wave of a supernova. This shock wave could hit and destroy the Pillars in about 1000 years. However, since the light from the Pillars takes roughly 7000 years to reach us, they might have already been destroyed by now. Consider that we see things how they were in the past due to the limited speed of light. At a distance of 7000 light years we see the Pillars today as they were 7000 years ago. If they are (or were!) destroyed by the shock wave we'll notice that in a few thousand years when the light of this event has finally reached Earth. So remember: by looking at the stars we always see the past, we will NEVER see the future... some people mix this up!

If interested, read more about: Molecular Clouds and Dark Nebulae