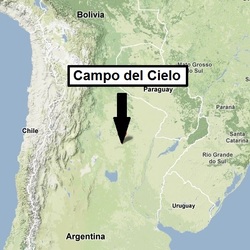 The Campo del Cielo iron meteorite fell 4200 - 4700 years ago, about 1000 km northwest of Buenos Aires in Argentina. More than 100 tons of material has been recovered so far. The largest single meteorite found in the Campo del Cielo strewnfield is called 'Gancedo' and weighs 30.8 tons. It is the second largest known meteorite on the earth's surface after the Hoba meteorite. During impact more than 20 craters were formed in a large area of many square kilometres; the largest crater is about 100 metres in diameter. These craters have various forms; some of them were created when a part of the meteorite hit the ground at such an acute angle that the meteorite bounced back up again, leaving a shallow crater behind. The main body of the meteorite - which had a diameter of at least 5 metres before it entered Earth's atmosphere - broke into pieces after atmospheric entry. Due to the high velocity of the meteorite of several km/s (ten thousand miles per hour) the surfaces of the pieces heated up and melted. Some Campo del Cielo specimens have nice regmaglypts attesting to the enormous heat and speeds to which the fragments were exposed during their atmospheric flight. 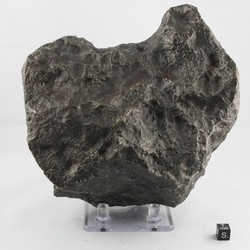 Campo del Cielo 9000 g
Campo del Cielo was discovered in 1576 by members of the Spanish military, but the site was already well known to the local Indians before this and they probably used parts of the iron for their weapons. In the following centuries several expeditions were made and recovered most of the meteorites. Analysis of the strewn field shows that the meteorite came from the south-west at a very flat angle of just 9°. As with most meteorites, Campo del Cielo originated in the asteroid belt. A collision with another asteroid belt object created the meteoroid and sent it into a new, elliptical orbit. The orbit's closest distance to the Sun lay inside the Earth's orbit, so Campo del Cielo became a so-called Apollo asteroid.

Fragments of Campo del Cielo come in a wide range of sizes from small specimens of just a few grams to much rarer big pieces of tens, and sometimes even hundreds, of kilograms. A few specimens - mainly still domiciled in Argentina - have masses exceeding 1 tonne. Many of the small ones, often sold as 'crystals', were once bigger specimens that were cooled down with liquid nitrogen and then shattered into smaller pieces. The pieces shatter along their octahedral planes; this way the crystalline structure is revealed. Sometimes they have flat surfaces where the natural crystal faces used to be. Anyhow, the surfaces of these pieces are not formed during atmospheric flight.

This is an overview of the known pieces with masses > 200 kg:


See our iron meteorites for sale.